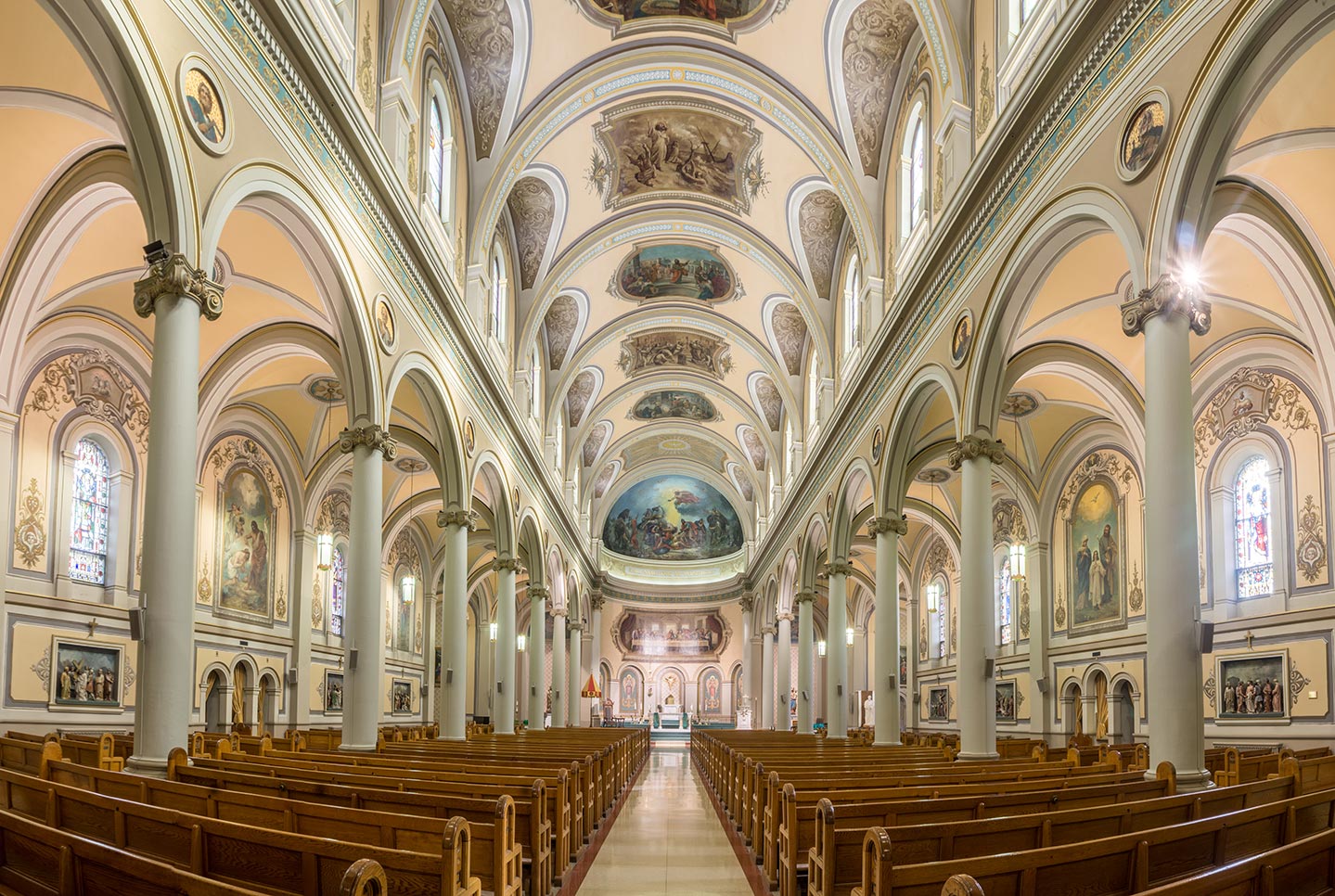 Established in 1822, St. Paul’s is the mother church of the Archdiocese of Toronto. The first St. Paul’s, of red brick and Gothic style, was completed in 1824. After the diocese was created in 1841, Bishop Michael Power used St. Paul’s as his cathedral until the completion of the construction of St. Michael’s Cathedral in 1848. In 1847, a typhus epidemic raged through the city, killing 850 people, including Bishop Power. Many were buried on the grounds of St. Paul’s Church and School, though the majority were moved to St. Michael’s Cemetery at Yonge and St. Clair.

The parish continued to grow, serving the spiritual and social needs of immigrants and the poor. A number of religious orders have served the parish. Among the first were the Loretto Sisters, the Sisters of St. Joseph and the Christian Brothers, followed by the Little Brothers of the Good Shepherd and the Congregation of Notre Dame.

In 1880, Bishop Thomas Timothy O’Mahony was appointed Pastor. He had served in his native Ireland and Australia and was a man of great vision and energy. The old St. Paul’s had to be replaced in order to accommodate the rapidly growing Catholic population of Toronto. Bishop O’Mahony soon began planning a new church with architect Joseph Connolly. They designed a large structure in Italian Romanesque style, which was rather extraordinary in a city of Gothic churches. The cornerstone was blessed in 1887 by Elzear-Alexandre Cardinal Taschereau, Archbishop of Quebec. The first Mass was celebrated just before Christmas of 1889.The statue of St. Paul was placed above the centre door in 1899.

Dean John Lawrence Hand was appointed Pastor of St. Paul’s in 1892 and served to 1936. If Connolly designed St. Paul’s and Bishop O’Mahony built it, Dean Hand completed the church and made it the work of beauty one sees today. He was responsible for commissioning most of the artwork inside St. Paul’s. The four major paintings in the sanctuary and the side apses were finished in 1893. The all-wood organ was installed in 1898 by R.S. Williams & Son, Toronto, and is the only one of its kind in North America. The stained glass windows were installed a year later, and the Stations of the Cross in 1901. The campanile (bell tower) with the bell from the original church was erected in 1905. Scenes for the life of St. Paul were painted on canvas in 1911. The angels behind the altar were created with the same technique in the 1920s. The bronze Pieta on the from lawn was erected in 1933 as a memorial to Bishop Michael Power and hundreds of parishioners who died during the typhus epidemic of 1847. A plaque at the front entrance bears the names of 81 members of the congregation who died during World War I. Beside the front steps is the grave of Bishop Thomas Timothy O’Mahony.

In 1998, Fr. Tom Day began the process of restoring the church to its original splendour. This continued under Msgr. Brad Massman in collaboration with the architect Charles Hazell. On August 3, 1999, Pope John Paul II elevated St. Paul’s to the rank of Minor Basilica by an Apostolic Decree. To be given this Papal honour, a church must be a centre of liturgical and pastoral life in the diocese and renowned for its antiquity, beauty, canonical significance or devotional popularity. Minor Basilicas receive special concessions such as the privilege of granting plenary indulgence on certain days in a year. The insignia of a Minor Basilica include the Ombrellino or Pavilion (a red and yellow umbrella) and the Tintinnabulum (a processional bell). St. Paul’s is the twentieth church in Canada to receive this honorific title.

The parish is made up of people from many nations. Some 30 languages are spoken in our diverse parish community.